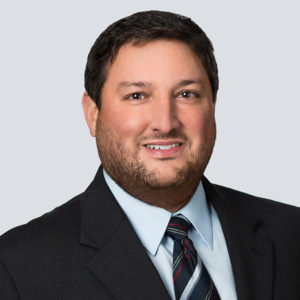 Mr. Azzarello received his Bachelor of Arts from the University of Notre Dame in 1997 and his Juris Doctorate from Tulane University in 2000. His legal practice primarily involves the nationwide defense of claims brought under the Longshore and Harbor Workers’ Compensation Act and its extensions, including the Defense Base Act. He also has extensive experience with claims arising under the Jones Act, general maritime claims, and he has presented speeches on Longshore/DBA topics at national seminars.

During his legal career, Mr. Azzarello has also handled marine cargo and collision claims, limitation of liability claims, and oil pollution claims. He has also represented individual mariners in license defense actions before the U.S. Coast Guard and has conducted numerous shipboard investigations both domestically and abroad.

Mr. Azzarello spent over three years as both an intern and law clerk/attorney advisor for the Hon. Lee J. Romero, Jr. of the United States Department of Labor, Office of Administrative Law Judges, assisting with preparation of Decisions and Orders related to the Longshore and Harbor Workers’ Compensation Act, Non-Appropriated Funds Instrumentation Act, Sarbanes-Oxley, and the Outer Continental Shelf Lands Act. While in law school, he also clerked for an international admiralty firm in London.

Mr. Azzarello is admitted to practice in Illinois, Louisiana, and Texas. He is AV Preeminent® Rated by Martindale-Hubbell®.